After adding a DVO digester our Somatic Cell Count is down. Using kiln dried shavings it was 175k–225k. With DVO digested fiber it is 125–150k! Solids are right off of separator as-is, no further composting, blowing or conditioning.”

Why DVO? It’s simple. Their system digests ALL the waste from a dairy. Nothing bypasses. The manure is thoroughly and efficiently processed, and the gas output is steady and predictable year-round. Together this means significantly more biogas ‘per cow’ is produced than with other digester designs. DVO also has an excellent track record of success. These things are good for the environment and the local community...and tend to make our investors happy too.”

“It also helps that dairy farmers already know DVO, and they like the other benefits the DVO system offers them.”

If you ask me about farming without a digester, we wouldn’t be very interested. We like what it does. We wanted to be able to handle a large waste stream in the most efficient, meaningful way possible.”

Our newest DVO digester produces more biogas than our old [CSTR/tank-type] digester ever produced on a good day, by at least 25%.”

Nobody has a better manure management system for dairies.”

During the Hong Seong Project I was impressed many times by DVO Staff's great team work. I could see it was the result of good leadership. If we can have such a great partner for next project too, this will be a most splendid thing.”

DVO's new Phosphorus Recovery system works as advertised. We previously operated a full-scale centrifuge...but the extra amount of polymer required for the centrifuge was just not cost effective – and still did not result in the same amount of capture of phosphorus. We are achieving better results with 1/3 the operating costs when figuring for chemistry and electrical costs, not to mention maintenance. According to WSU we're removing and recovering over 90% of our phos – AND putting a meaningful dent in our nitrogen too. The amount of solids and nutrients removed by this system are unbelievable. The liquid coming off it is semi-translucent. The solids are stackable and manageable. DVO and their Washington representative, Regenis, have been terrific people to work with. DVO has added additional value to our anaerobic digester, and far exceeded our expectations.”

I get asked a lot why I’m doing this when I’m getting ready to retire, and I’ve wondered that myself. But things have to continue and I’ve thought about this possibility for a long time. I didn’t know how to do what I wanted to do, but I found some folks who helped us get there. They gave me exactly what I asked for and I’m tickled with it.”

The digester is one of the few things we have ever purchased that has exceeded our expectations.”

Cenergy has found that the DVO digester technology is the most effective system for removing volatile solids and yielding long, linked fibers after solids separation (left, right). The fibers give Magic Dirt the porosity and water holding capacity that emulates peat moss.”

Manure has a lot of value.” “We are powering ourselves. In approximately 5 years the electrical savings will pay for the costs of the project. The savings will only continue as long as we have cows.” “We are the ‘ultimate recycler!’”

We need to produce 70% more food by 2050. That happens with innovative, sustainable and creative ideas and technology on the farm.”

What I saw was quite simply, recycling at its best. The digester uses manure to create electricity, which the farm can sell back to the grid. But that’s not all. The process also generates liquid fertilizer and a solid material that can be used as bedding for the dairy cows. Quite literally, nothing goes to waste. I would love to see more of this technology used in Georgia.”

When a business such as ours makes an investment of this size the consensus from our family was to go with the proven technology. For us that meant DVO.”

We would never do any dairying without a DVO digester. Even if the electricity and manure solids sales made it only break even, the other benefits the system brings to a dairy would still make the digester essential.”

We were the only farm in the area able to harvest a third hay crop. I know it’s due to heavily applying digested liquid after each cutting.”

DVO, a great company to work with. The experience of building a digester is stressful for a dairyman. However DVO made it a pleasant and fun journey. They have a team of people to work with and understand the fundamentals of dairyfarming. They took care of all details from writing grants to helping with design and installing the last manure pump. They have my philosophy of keeping things as simple as possible on the farm. However the most important part of their company are the people. Simply a great group to work with.”

My dream and Sue’s dream — and people look at me like I’m crazy — is to have a zero-carbon-footprint dairy. And I believe we can get there.”

What is really amazing is what you don’t see or actually, smell. Spending the better part of the past two and a half years down here, I thought that I had just grown accustomed to it. But that’s not it. The odor now is virtually gone.”

Manure digestion brings great synergies to the table for crops, the environment and a farm’s balance sheets.”

With the bedding situation out there-sawdust and shavings are hard to come by...I'm more or less doing it to get the bedding.”

We needed somebody who knew even more about digesters. We ended up talking to Steve Dvorak. A lot of vultures descended on us, said they were engineers. They really didn't have too much to offer when it came right down to specific questions. Steve had a lot of good ideas, a lot of answers, and experience. And so, after visiting with him a few times it was pretty obvious that we'd be able to work very well with him. So we went with DVO."

The advantages are just unreal: pretty much get rid of the odor; we can use bedding out of the fiber; defer some costs by making electricity, and it's green electricity, which our environmental people are interested in. The fly problem is pretty well gone; pathogens are gone; nutrient value of the manure that we're hauling out, the nitrogen is more stable, the phosphorous more available; and the neat thing is the manure we're hauling out is going into the digester at a pH of 6.8, 6.9 - it's coming out at a pH of 7.8 to 7.9. So we're getting a neutralizing value in the manure; besides, there should be a savings in lime as we get down the road. So, with all the features of the whole thing, it's pretty much a win-win thing for the community and the environmental concerns and everything.”

Gordon's system has been very reliable. 'A farmer should not invest in a digester solely to generate electricity,' he says. He recommends that farmers do the same by investing in a system that 'has an excellent track record.'”

The digester allows us to have another source of income. Now we're producing electricity along with milk. It's a secondary revenue stream that is independent of milk prices.

We also use this as a way to be better neighbors. The odor issues that the dairy used to experience have been minimized to the point of being negligible now. We're very proud of it. It makes us better neighbors and that's something that we set out to do for that reason."

The digester setup, which has been constructed at this site, has virtually eliminated all manure odors.... Taking into consideration the number of animals at this site [3,300], the aroma is better than one would expect from a 100-cow operation without a digester.” 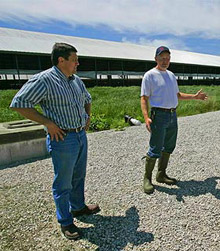